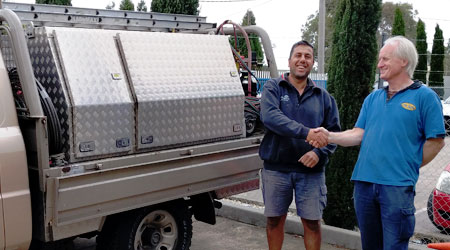 Geoff with Bart from Profile Plumbing

Over the last 16 years of making Ute Safe boxes we have received some lovely words from customers; and your words encourage us to keep going, knowing that we can help keep you going.

Bart from Profile Plumbing came by the factory recently to replace two gas struts. Over his time with these boxes, he has looked after them, and of course they have looked after him. He has made huge savings in time. He has set up his boxes to hold his gear, the way that he works. It takes a lot of time to get this right, and some boxes can make it very difficult, if not impossible. The Ute Safe boxes are a breeze to set up, and once they are ready to go, they stay ready to go. Down time and replacement time is virtually eliminated. Over the 13 years Bart has had his Ute Safe toolboxes, he has watched as other guys he works with, have had to replace their toolboxes several times.

This was the first time Bart needed to invest any further money into his boxes, to protect the tools of his trade. Quality is always cheaper in the long run. If you’re after a quality toolbox that is made to last it’s a Ute Safe you are looking for.

Why do Ute Safe boxes last so long?

Ute Safe has always produced boxes with the intent of making quality not quantity.

The quality of Ute Safe toolboxes is recognised by quality tradesmen. Anyone with the best tools, interested in doing the best job, wants to make sure they have the best box too. The team members have been designing and building boxes since the 1980’s. The hard lost and won battle to make the best box is why Ute Safe boxes don’t wear out. Our previous customers might need additional boxes, but they don’t need replacement boxes. As hardware eventually fails over time, every Ute Safe box is built to be maintainable. Down time is virtually eliminated, and when total cost of ownership is the gauge and not the sticker price, Ute Safe boxes are the easy choice.

13 years old and still going strong. A teenager is normally a very expensive thing to have, but not when it is a Ute Safe box.